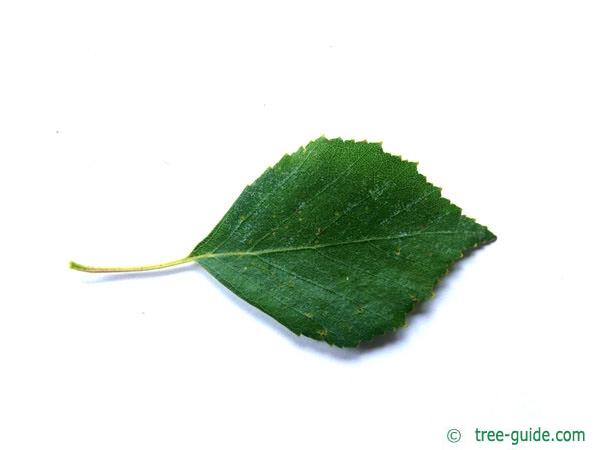 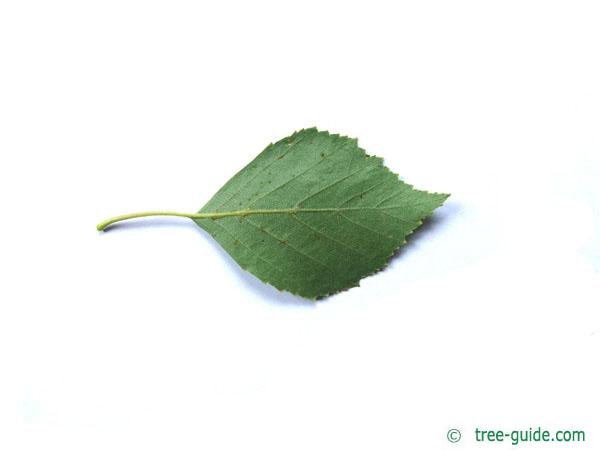 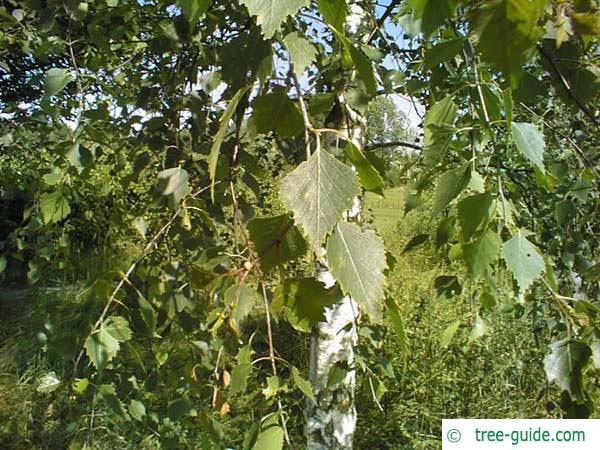 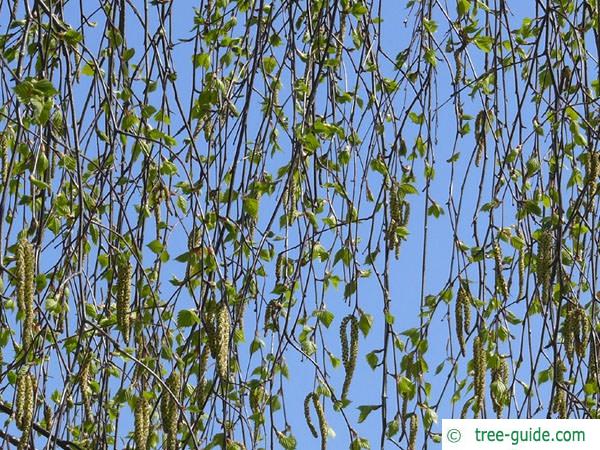 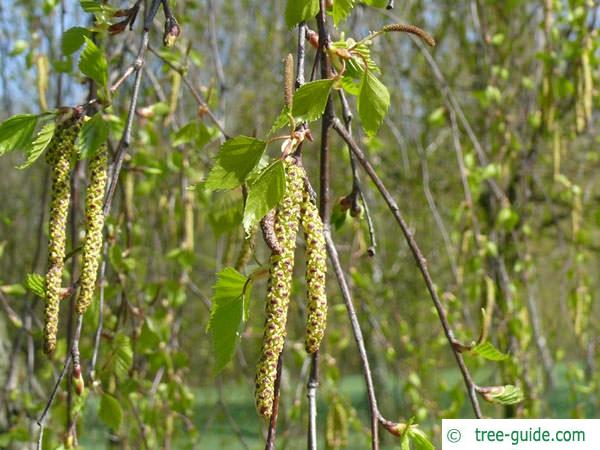 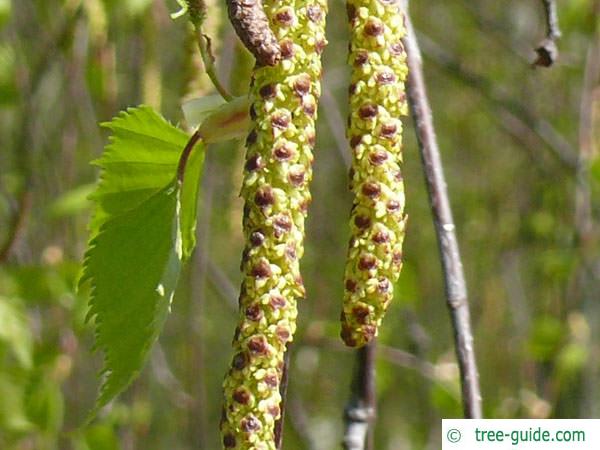 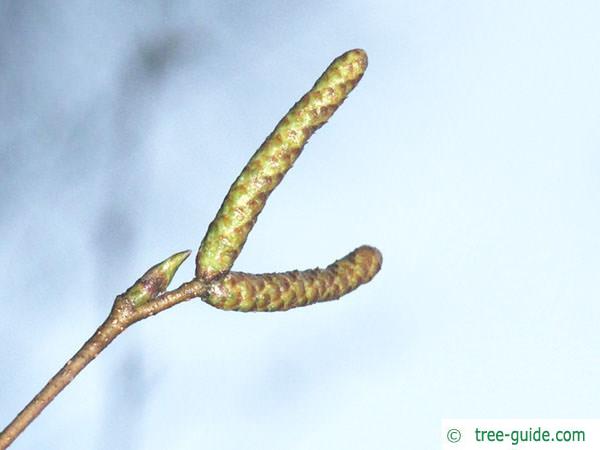 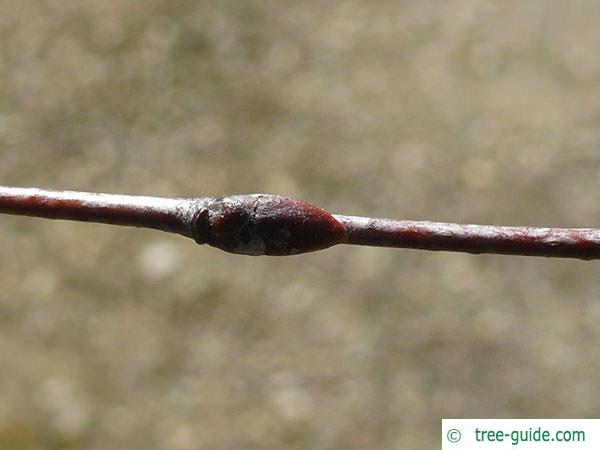 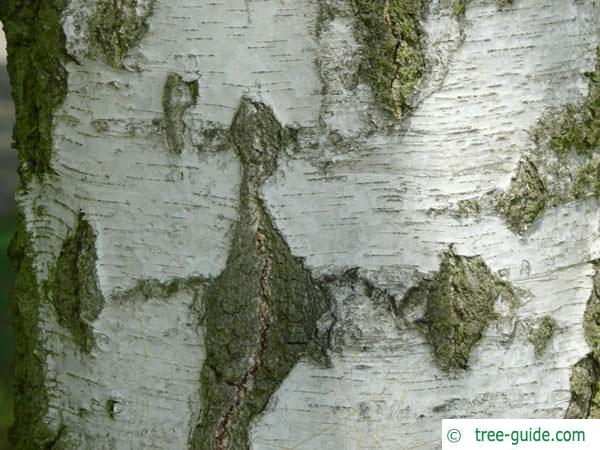 white birch (Betula pendula) the trunk is white and black 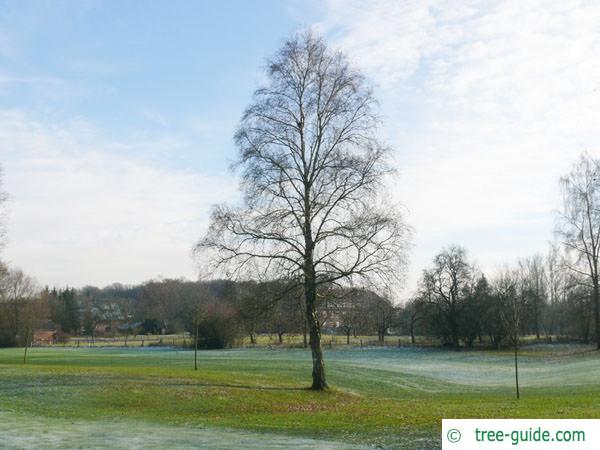 The European white birch is widespread in Europe and beyond. It is an excellent pioneer plant as it provides very little demands on the soil. Because the birch sprouts early, it is used in many countries for spring rituals.

Betula pendula are rapidly growing, undemanding trees, which after about 50 years have reached their final height of about 25 meters (82 ft). Silver birch is found in sparse deciduous, coniferous and mixed forests and is native to almost all of Europe. An exception is Northern Scandinavia. In the Alpine region, the trees can be found up to 1,900 meters (6.200 ft) in height.

The trees have a long, continuous trunk and a loose crown. Betula pendula is characterized by acute-angled branches and overhanging branches. The growth form is extremely varied. Characteristic of Betula pendula are the changeable, four to seven centimeters long leaves. The bark is black-brown to gray in young trees. Later, the trunk assumes its characteristic shape and is rolling white. The trunks of Silver birches can be up to 80 cm thick. in rare cases the trees reach a height of 30 meters.

Between March and the beginning of May, the flowering of Silver birch begins. The male kittens are of yellowish color. During the late summer, the female kitten turns into an intense brown color. Each individual kitten can develop hundreds of airworthy seeds, which the autumn wind carries over considerable distances. At about ten years, free-standing trees are sexually mature. In the stock, sexual maturity begins about ten years later. The male flowers form already in the fall of the previous year and overwinter, before they open in the coming spring.

The fruits of the Silver birch ripen from August to September. The thin-skinned nutlets are about three millimeters long. About two weeks after their fall and the spread by the wind, the fruits begin to germinate.

Below the bark of Silver birch is the white to yellowish-white wood. There are hardly any differences in color between the core and the sapwood. Birch wood is difficult to split, elastic and shrinks strongly. As a timber birch wood is rather unsuitable. On the other hand it is used especially as plywood. Even ladders, tables, chairs or wooden shoes are made from the wood of Silver birch. Birch wood is difficult to store and can quickly turn yellow or stained. From the bleeding juice of the birch hair is made. The tar of the bark serves as a preservative for leather. Finland has the highest quality birchwood stocks.

was formerly used in households as hair tonic or made into jelly or birch (birch limo).

Birch water occurs in spring won the sprouting of the leaves. At this time, the birch has already begun with the pressure build-up for the upcoming leaf ejection. To get to the birch sap, a branch is sawn off and the escaping juice is collected with a container (bucket). It could come together two to three liters on the first day. In the following days, the yield is always lower because the wound closes itself on its own. The juice of the birch is drinkable and tastes a bit sweet.

The leaves of White birch are up to 7 cm (2.8 in) long and pointed. The leaf margin is serrated.

The male catkins are conspicuous yellow, the female flower is inconspicuous.

The branches are thin and hang down.

Chicken of the woods