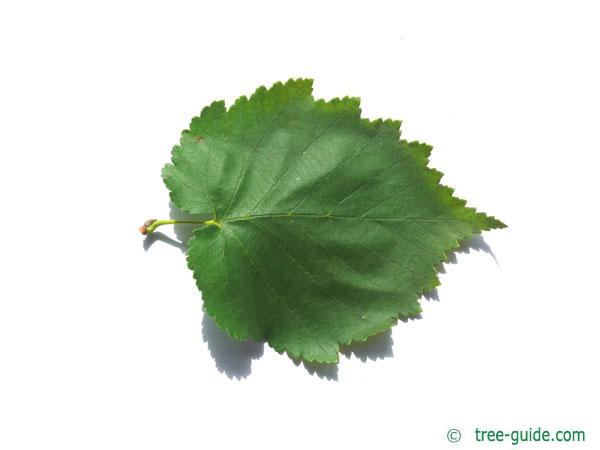 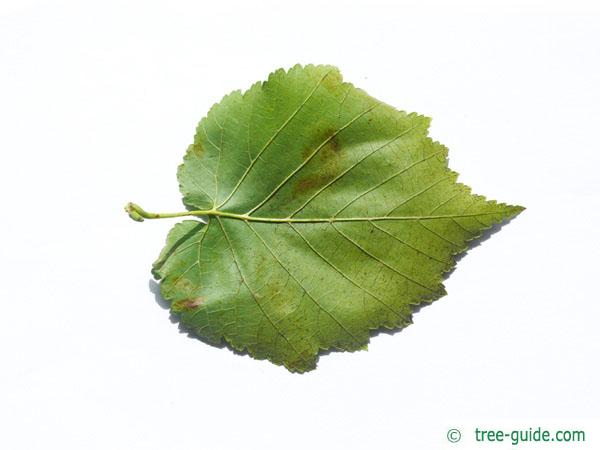 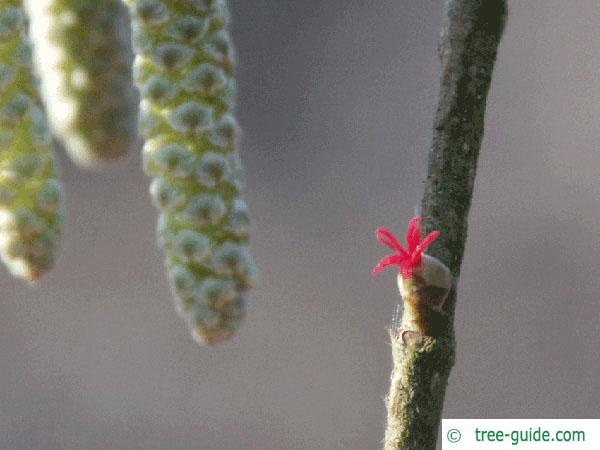 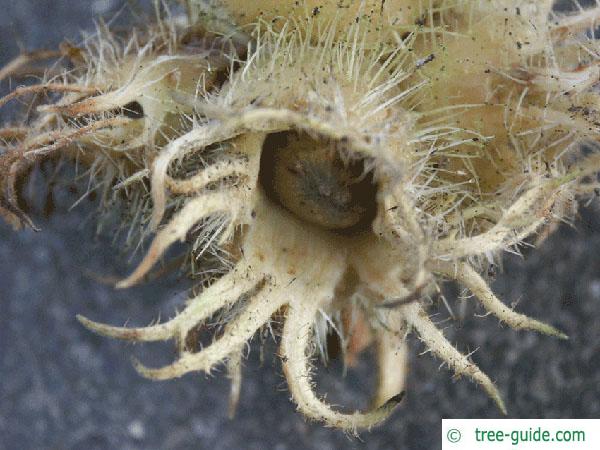 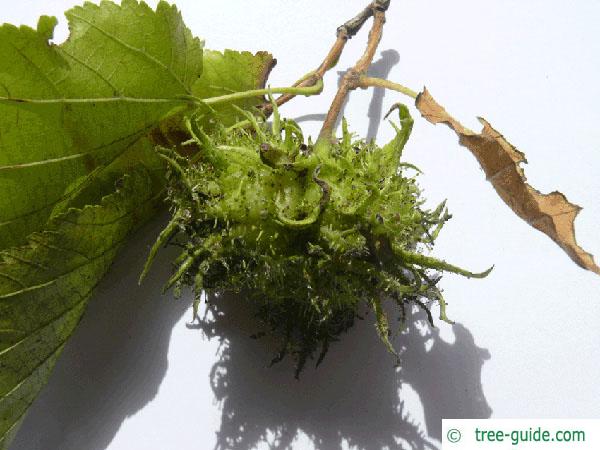 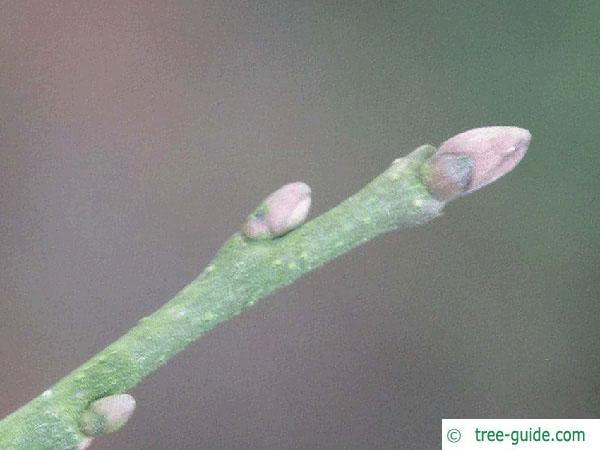 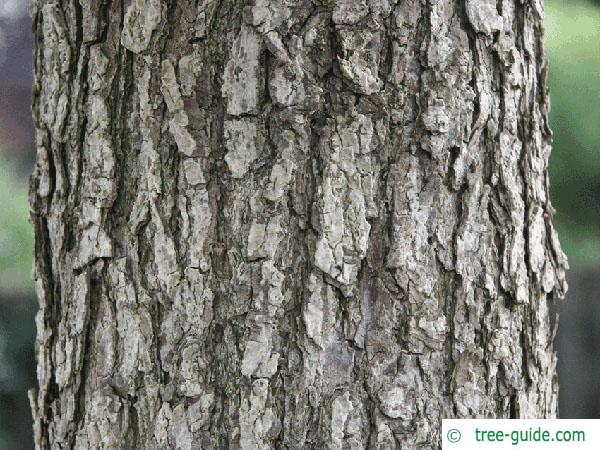 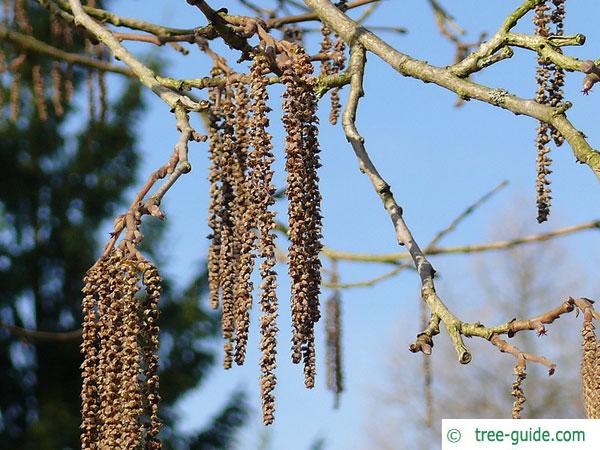 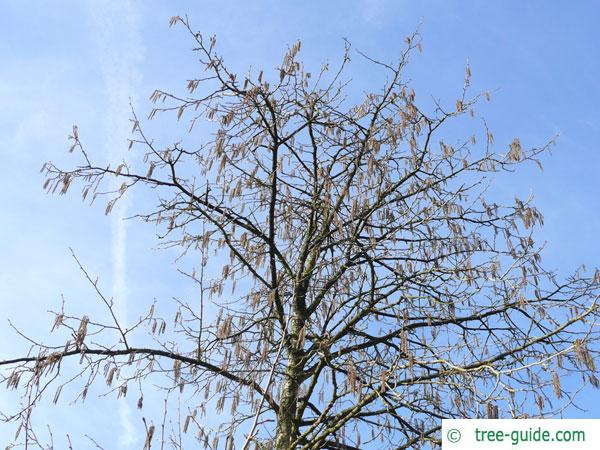 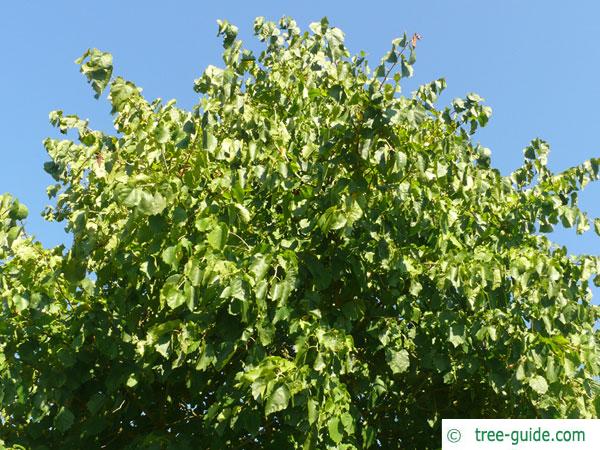 The Hazel tree is the largest of its kind. It originally comes from the region of southeast Europe / southwest Asia. In Europe and North America, the hazel tree is widely used as an ornamental tree.

The Turkish Filbert Hazel is a deciduous tree that grows up to 20 meters (66 ft) tall. On the straight trunk sits a pyramid-shaped crown. The leaves are arranged in two lines and divided into leaf blade and petiole. The leaf blade is pointed and heart-shaped. The petiole reaches a length of about two centimeters. The nuts are smaller than the common hazelnut, but also edible.

The Turkish Filbert Hazel has egg-shaped close-fitting buds of greenish-brown color. The bud is covered by greyish brown bud scales with ciliate edges.

The winter buds of the Turkish Filbert Hazel are green and later take on a brownish color. At flowering, the buds are light yellow and dusts. The male kitten reach a length of about ten centimeters. The female flowers show the bud shape. At flowering, the female flowers are recognized only by their outstanding reddish scars. In the male flowers up to twelve inches long kitten are characteristic. The Turkish Filbert Hazel is already in bloom in February or March and is thus a pronounced early flowering.

The fruit stalks of the Turkish Filbert Hazel comprise five to eight nuts. The edible nuts are smaller and harder than the common hazelnut. The nuts are pleasantly mild in taste and can be stored for a long time. The shell is much thicker than that of hazelnut. The nut is difficult to remove from its shell.

The Wood of the Turkish Filbert Hazel

The light brown wood of the Turkish Filbert Hazel is very well suited for the production of furniture and carvers like to use the nicely grained wood of the Turkish Filbert Hazel. The wood hardly rots and is therefore suitable for underwater installation. In this case, weaker or inferior woods have very good properties than firewood. The wood features a light brown to reddish core and a yellowish sapwood. The medium-hard wood is sold under the name "Turkish hazel". Further uses are the processing into chipboard and fiberboard or veneer wood. From the fruits oil is obtained, which is used for the production of paints or in pharmacy.

The leaf of the Hazel is ovate to heart-shaped, often double serrated. The leaves are up to 12 cm (4.7 in) long. The leaf margin is serrated.

The male catkins are yellowish and are up to 12 cm (4.7 in) long. The female flower is inconspicuous and red.

The nuts are edible, but smaller and much harder than the hazelnut.

The young shoots are hairy. The branches brown.